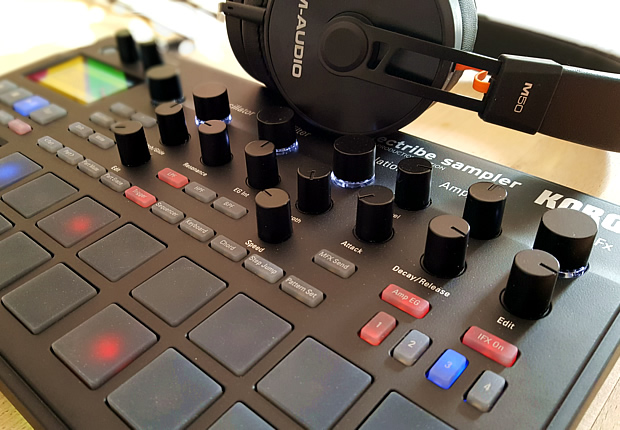 I have many sensible/dull work things to do at the moment, so I shouldn’t be writing a blog post about music making. But I need to work out some thoughts about music making anyway, so it is actually important to do that now.

I need to work out some thoughts about music making because:

→ I think music will be a bigger part of Making is Connecting, in the Second Edition, which I am meant to be writing right now.

→ I think it will be useful for talking about when I’m in New Zealand.

→ It might help when I’m doing a lecture for actual Music students very soon.

Over the past 17 months, since I began to acquire some electronic music instruments and recording equipment, I have been making some music. I don’t get lots of spare time, so this activity is occasional. But I have made some progress.

I have not shared any of this on the internets before. And I am aware that this is not an especially exciting moment for anybody. In demand and supply terms, the supply of not-especially-good music made by learners like me far exceeds the almost non-existent demand for that material from listeners around the world.

The music outputs I have at the moment aren’t even meant to be heard by anybody. I am learning and making, and enjoying the process, but if ever there are to be outputs that I am confident might find some kind of audience – well, I’m not there yet.

On the other hand, it’s normal nowadays, and for me, to share creative processes online, without worrying too much about my usual perfectionism. So there are some actual ‘outputs’ further down in this piece.

Why did I want to make music? I’m not quite sure what led me to start actually doing it. In previous parts of my life I have done oil painting (around 2001-05) and drawing (as seen in A Drawing A Day, 2004-09), and it was nice to have a creative thing-I-do which was not connected with work or anything else.

In music terms, when I was at school I played the clarinet (1979-1985), although that was just playing tunes written by other people, and practicing scales, neither of which I found satisfying. But music has always been quite a big part of my life, and I have quite a storehouse of unusable information in my brain about electronic music and the BBC Radiophonic Workshop and, erm, the Pet Shop Boys, among other things.

And then I stumbled across some cheap synthesiser things on Amazon and thought “oo!”.

I didn’t actually get any of those, but I did buy a Korg Kaossilator 2S, which is like the famous Korg Kaoss pad but smaller and cheaper, and generates sound rather than just adding effects, but with a touchpad interface which is different to having a keyboard, and therefore either more ‘experimental’ or more rubbish, depending on your point of view.

In my memory, it took me a while to get going with it – as you would expect – but I see from the dates on the files that within 10 days I had made this track, and I know I made a few before this one. This combines looped Kaossilator sounds with a recording of birds singing in Whichford Wood, Oxfordshire, which includes some church bells in the background. I got that sample from Freesound.org, a delightful archive of recorded sounds, many with Creative Commons Zero licences, which means you can do anything you want with them.

And within a month I had made this one, which has different parts of the loop being added and taken away (because I’d worked out how to do this quite simply in Audacity). It also features a Croatian church bell and a Song Thrush, as you would expect.

Then some time passed and I got more and better equipment, including a Korg Electribe Sampler music production system, and an excellent Zoom 8-track recorder.

At this point I made the decision that editing, sorting out and fixing up a track on the computer was, in a sense, too easy (!) and I wanted to have a thing to do which didn’t require me to be sitting at a computer screen. So since that point nothing had been done on computer (except after a track has been made, and then of course the recording may pass through my computer on its journey into the world, such as when I upload it to Soundcloud, or get it onto my phone).

Again for a while I wasn’t able to work on it often. I did tinkering sometimes but it doesn’t seem to have led to any outputs in late 2015/early 2016. But then I did produce this track in April/May this year.

In this case, I was almost happy with it – even though there are clearly things wrong with it, it isn’t mixed well, and it goes on too long – and I played it to Matt Gooderson, who is an actual successful commercial musician and producer and knows what he’s talking about. He’s also my friend and I thought he would be kind.

And he was kind, but in the bit where I was playing it from my phone and he was listening politely on headphones, I thought … oh dear, I’m just another amateur who has put in about 25 of the 10,000 hours I need to be really good at this.

But that’s all good learning.

Matt noted (in some polite way that I have now forgotten, but the point of it was) that I didn’t really have much shape or change or development within it – it’s mostly all the same kind of thing – and perhaps more importantly he asked what it was meant to be.

He was asking an excellent question – ‘What are you trying to achieve here?’. But my response was essentially: ‘I see what you mean, but really, I’m just very happy to have created any recorded music at all – that’s about as far as the intention goes’.

Matt is right, in that if it’s ever going to be much good it needs much clearer thinking behind it.

At the same time, I do think, I’m just learning, and playing around with music-making – and thereby learning how to do things and how to create certain effects – is what I need to do quite a lot of before I then move into a more advanced phase where I do things with very particular intentions.

Anyway, so, after a bit of a lull, I then did another track over the summer, which is noticeably better, I think. I mostly did the whole thing on the Electribe within about 4 hours, plus maybe another 2 hours, and then an extra hour of so of adding some whooshes, extra sounds and ‘warm glue’ from the Kaossilator.

So that is the story of what I’ve managed to do so far.

In order to include the music in this post, I had to put the four tracks up on Soundcloud, which meant I had to give a name to each of the tracks. I hadn’t thought about that before (!) – I only have them saved with titles like ‘Summer 2016’, which is not some kind of mood, but merely a description of when I made it. I couldn’t really think of very good English names for these instrumental tracks, so have chosen some appropriate-sounding words from Danish, which seems much better, unless, I suppose, you are Danish.

In the potentially more interesting next blog post I will try to write down what I have learnt, so far, from this music-making.