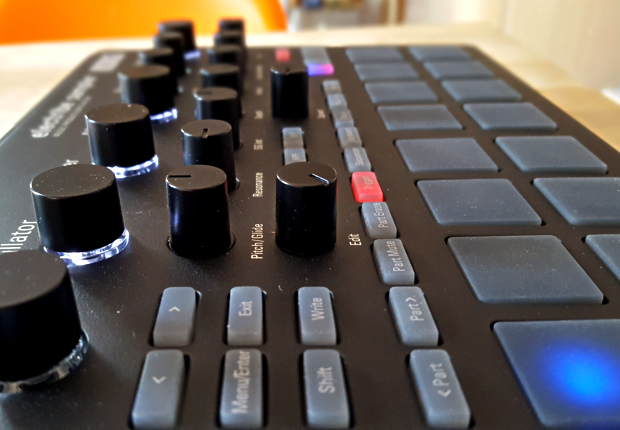 In the previous blog post, I set out the story about how I’ve been making music for more than a year. This blog post is the more reflective follow-up, where I wonder: what have I learned?

I’m usually trying to do creative things with tools and materials that I am familiar with – where I know what I’m doing and I can do it quite well.

Making electronic music was not like that. Knowing about and liking a kind of music doesn’t equip you very much for actually making it. I suppose that’s the same with any creative endeavour – you can be a huge fan of portrait painting, or graphic design, or fashion, but still find it pretty impossible to create remarkable instances of such things yourself.

I’m used to being able to do things so that, after a not-too-long amount of time, I arrive at something satisfactory.

So I’ve had to learn about frustration, and getting better at something very slowly, and feeling what it’s like to be in ‘hour 4’ of the allegedly 10,000 hours journey to mastery of a medium.

Absolutely everyone these days talks about the value of failure. I suppose they don’t actually deny that it’s annoying.

. . . But not wholly unfamiliar

Ages ago, as mentioned in the previous post, I did oil painting as my sort of creative ‘hobby’ (2001-05), and what I definitely did like was the experience of pushing paint around on the canvas – because that’s what you do with oil paint, unlike, say, watercolour – until I was happy with it.

I find this kind of music production very much like that – you can spend a lot of time on one part, shaping and changing it until it’s pretty much how you want it. And then when that part has changed, it affects how you feel about the other parts, and then you feel you should change them too.

Intangible, invisible thing which occurs in a linear way across time

With a painting, though, at least it was a thing, and one thing, in front of your face.

With music, your creation exists in an intangible space, you can’t see it, and absolutely inevitably it unfolds across time, so it’s really unlike other kinds of making.

This also means it can take very long to do. Doing a painting is like trying to make one great moment. But making a music track you need loads of moments, including several great ones, all in a line.

My admiration for music makers has never been greater.

The above comments on my own experience of music making seem unremarkable, and will even be pointless and banal to anyone familiar with music production (of course it’s invisible and intangible! That’s what music is!).

To bring my music-making into the realm of Making is Connecting then I need to bring it into the open – as I am doing, here – and to see what happens if and when I have supportive or creative or inspiring conversations about it. So, maybe that’ll happen, and I’ll report back.

One thing I have found interesting recently, which connects music and the themes of Making is Connecting, has been the book Musicking by Christopher Small. (A handy article-sized version appears in this PDF).

Small opens the book by rather quickly and astonishingly demonstrating that music doesn’t exist.

OK, to be precise, he argues that it’s not very meaningful to talk about ‘music’ because it means a bunch of different things (some marks on paper, the content of a recording, a certain type of vibrations of air in your eardrum, etc) and is therefore not the most useful term.

Instead, or at least as well, he proposes we talk about musicking – the activity of making or responding to music, individually or collectively.

This connects nicely with the Making is Connecting argument that the important thing is the creative process and activity, more than the end-product itself.

And it helps to explain why I was happy to share my music-making (in the previous blog post) as part of talking about the process, but I don’t want you to review it as an ‘output’, on which terms it is bound to be disappointing. I’m just learning, so I don’t want to be judged on the process of my learning . . . I’m just learning, and trying to be open about the process. I’m participating, creating, and possibly connecting. It may not be ‘great music’, but I really never said it was.

One Response to “Making music (2): Reflections”