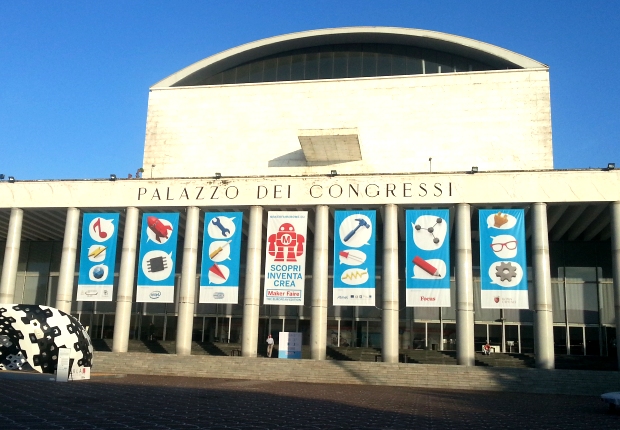 This year I had the good fortune to be invited to speak at both the World Maker Faire in New York (21-22 September) and the first official European Maker Faire, in Rome (3-6 October). This blog post gives you videos from both.

When they invited me to speak at the one in New York, I thought ooh this might also be a chance to go and visit Mitch Resnick at the MIT Media Lab. (I know Mitch from our work together for LEGO – such as the Cultures of Creativity report – but wanted to build on this promising relationship). So then I had the even better idea to ask Mitch to do the talk with me. And so our double act was born.

We called it ‘Six Amazing Things about Making’, partly so it would be easy to organise without too much rehearsal or anything, because we could just bring along three things each, talk about them, and discuss each other’s. I wrote a little blurb which said: “Mitch Resnick, co-inventor of Scratch, and David Gauntlett, author of ‘Making is Connecting’, each discuss three objects which show the power of making. They show that making is learning, fosters happiness, and is true social participation”. So that’s what we did. Here’s the video:

[This embedded video may show you just the first 10 minutes; if so, click the ‘watch full program‘ button to view the whole 30 minute session].

If you’d rather look at a single picture rather than watch the video, the good people of ImageThink managed to capture it unusually well: 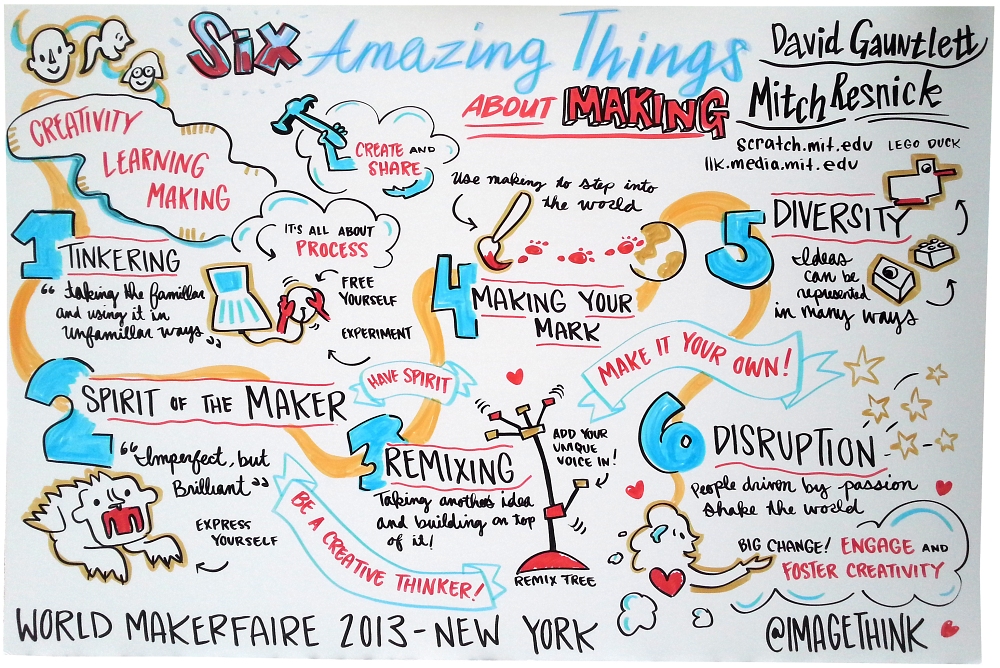 I also took the opportunity to ask Mitch about Maker Faires and the ‘maker movement’, which you can see in this short video (2½ minutes):

And then I recorded some other stuff at that Maker Faire, and made this 4½ minute video, which includes some of Mitch talking and some other things as well:

So then there was Maker Faire Rome, which was in part a launch for ‘la Società dei Makers‘, otherwise known as the Italian translation of ‘Making is Connecting’. There I did a new, optimum talk about the themes of ‘Making is Connecting’. By ‘optimum’ I merely mean to say that I squeezed my best points into 15 minutes; some of these points are ones I’ve been saying about the book for two or three years, but some of them were new. Here’s that video:

And for people who don’t want to watch a 15-minute video where I say some points about ‘Making is Connecting’ that they may have heard me say before, I did an even more convenient 5-minute version which includes my new themes about taking small steps into a new world, and making and sharing being a way of saying: ‘Here I am’. Here’s the short one:

There’s also this nice video made by Arduino, which includes a number of people talking (including me, around the 5.08 mark):