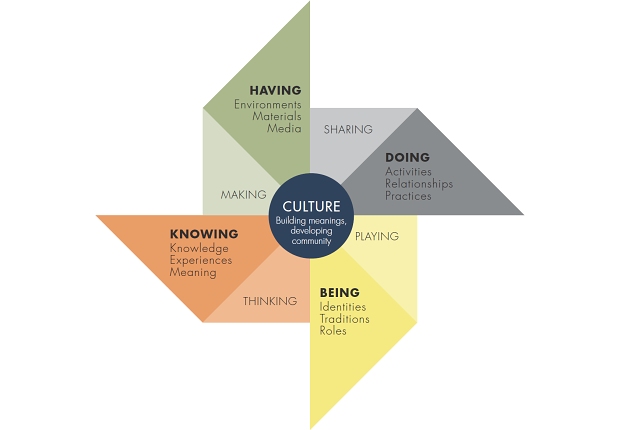 For the past 18 months, I’ve been working with colleagues at the LEGO Foundation, and in academia, on the LEGO Cultures of Creativity project. I’m very happy to say that that today (2 July 2013) the full report – written by me, and Bo Stjerne Thomsen of the LEGO Foundation – is published online, alongside a set of 18 essays on the role of play and creativity across cultures, commissioned from experts around the world.

The Executive Summary begins by saying:

This report argues that societies often fail to properly nurture and sustain the cultures of creativity which are vital to their future. Young children arrive at school with a creative mindset, but this is often eroded or even erased by conventional educational practices. We are failing our children if we do not recognise the crucial role of playing, making and sharing in the development of both the individual human being, and the innovative society.

Cultures do not emerge passively, or at random. Cultures develop out of a practice of people doing things together, because of a collective need or a shared passion. It is common to think of culture as something abstract, perhaps created through initiatives at a national or international level. But cultures really develop through the opposite kind of process – when people find ways to play, make, and share together, and to negotiate differences to create shared meanings.

I’ll pick out a few of my favourite points from the report. First, on the role of cultures:

• Humans gained a huge evolutionary advantage when we developed ‘cultural memory systems’ such as writing and drawing, giving us a way to record, share, and manipulate ideas. Cultures can be seen as huge networks of individuals drawing upon and interacting with the vast amount of material in these ‘external storage systems’ of books, films, and archives.

• The internet is the most extraordinary of these external storage systems, offering access to a vast array of information, text and audio-visual material, and giving people a platform to share and exchange ideas, and to collaborate on projects together.

• Culture can act as a kind of ‘scaffolding’ for ideas, making them stable and manipulable, and tying them down in a shared language so that other people can appreciate, use or change them.

On developing the creative mindset:

• There is one place of learning which does foster creative, risk-taking, collaborative activities: kindergarten. The notion of the ‘lifelong kindergarten’ offers the possibility of a space where everyone can tinker, experiment, and play. Whilst doing so, they learn about collaboration, and the creative process.

• Therefore, in order to develop as creative thinkers, children – and adults – need opportunities to make things. They also need stimulating environments to do this in, and engaging tools and materials to do this with. Because older children and adults generally do not want to use the same materials as young children, there is a challenge to produce fruitful tools and materials for older people which still embody the values of playing, making and sharing.

• To sustain the creative mindset, within any culture, we need a ‘lifelong kindergarten’ spirit, characterised by as many opportunities as possible for playing, making and sharing. This must involve stimulating environments, and support from leaders, role models, and peers.

Then we’ve got a nice diagram (see top) offering a dynamic model of culture, showing that culture is a system through which people build meanings, and develop community, through the dimensions of having, doing, being and knowing. The model shows that the creative mindset is supported when there are stimulating environments and resources (having), when there is a lot of inspirational activity and the engaging support of peers and mentors (doing), when there is an ethos which supports the passions of makers (being), and where there is a solid body of expertise and knowledge, and support for learning (knowing). These four dimensions are driven by playing, making, sharing and thinking – the active processes through which people learn and form meanings together.

Then we’re able to go on to talk about how bridges can be built between cultures, which is to do with people needing a common language through which they can develop shared meanings. This doesn’t have to be a written or spoken language, it could be about people making things together in a common system. The bridge-building process is not about ignoring differences, but is more about channelling and supporting the exchange of ideas, and supporting – in the very broadest sense – conversations.

The ideas above owe a lot to Merlin Donald (culture as an ‘external storage system’), Mitch Resnick (the ‘lifelong kindergarten’) and Anne Scott Sørensen (for the basis of the model of culture), as well as Gerhard Fisher and Yoshiro Miyata (on building bridges), and others.

The process of writing this report was different to how we’d done it before. Back in 2008 when we wrote Defining Systematic Creativity, it was just me and Edith Ackermann (of MIT) and Cecilia Weckstrom (of LEGO) working together. In the years since, more great people have joined the team, but in writing terms it possibly becomes a case of ‘too many cooks’. So this time, the writing of the main report was much more streamlined – by which I mean, fewer cooks – but we had input from the 18 excellent essays written by expert individuals (or, in some cases, duos) from around the world. The essays very much fed into, and shaped, the whole of the final report. So we still believe in collaborative co-creation, but we’ve organised it a bit better!

See the Cultures of Creativity project at the LEGO Foundation website. The report and the essays are, of course, all available to download for free.