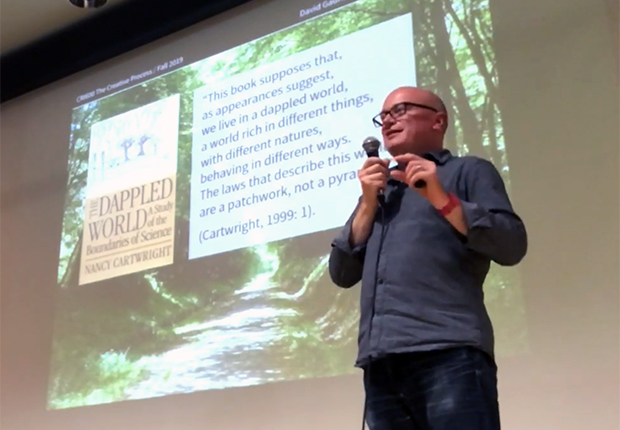 This term (September to December 2019) I have been teaching ‘The Creative Process’, a core course for third-year students on Ryerson University’s Creative Industries BA degree. (I talked about rebooting this course in a previous post).

I have been recording the lectures by the not-very-good method of propping up an iPad on the front row and pressing ‘record’. As if that’s not shoddy enough, I use the inferior secondary (‘selfie’) camera because otherwise I can’t even see what it is pointing at.

But the sound is OK and the picture is OK unless, you know, you really want to see anything.

As these videos are too long and broadly-speaking unwatchable, they are going to ruin the last dregs of my YouTube credibility. (I’ve had over 200,000 views, you know … but not for these!).

However, I’m still kinda pleased with this series of lectures, in which I am evidently testing the idea of what a lecture can be. At one point in lecture two you can even find me explaining to the students what an ill-advised format the lecture is. But that’s part of making explicit how I’m trying to do something that’s … not as bad as it could be. Which is an aspirational aspiration if ever I heard one.

In lecture two I also take a deliberate tangent and do an illustrated personal passage for a while, featuring 11 things from when I was growing up that may have contributed to my own sense of creative self, to see what that would be like (based on the logic that I can’t just be giving students generic stuff that is already available online anyway). It doesn’t quite work, though, because after a few minutes you can’t help thinking ‘Why’s he talking about this?’.

But then after that, I sent all the students an email of apology, and had a few nice responses, and in lecture three I also say sorry and reflect on it a bit.

It’s all a learning process, see! I am making my own creative process evident, because — well what else can you do in a course called The Creative Process?

Here are the videos.

Lecture 1: Introductions — It’s mostly introductory stuff about the course at the start, then we explore what creativity means by discussing a sequence of pictures of things that may or may not be creative.

Lecture 2: Your creative identity — Includes the overlong personal bit from me but also an engaging worksheet!

Lecture 3: Inspirations — A pleasantly shorter mini-lecture from me, with a few interesting things, and then the rest of the session was with our excellent special guest, Jodianne Beckford, which I didn’t include in the video because Jodianne is amazing and this video didn’t do her justice, especially as she was in the faraway corner. Instead, check out her other appearances in podcasts and of course her own podcast, The E Project.

Then in week four there was a different thing for Creative Industries students, ‘Industry Night’, so there was no lecture that week, and so the numbering potentially gets confusing from this point onwards. Next is lecture four, but the first slide on the screen says week five, because it is week five. But it’s the fourth lecture.

Lecture 4: Enabling, managing and fostering creativity — including various things about creativity and how it can be supported.

Lecture 5: Building your networks — In particular, thinking about the meaning of a network for creative practice.

Lecture 6: Vulnerability — The first part of the lecture didn’t record for some reason, so I did it again a bit quicker after everyone had gone home, meaning that this is actually a relatively concise introduction to a topic, for once.

Lecture 6 part two: Special guest Sy Blake — Sy talks about how he got his design career going (‘fake it til you make it’) and how he built his creative life.

Lecture 7: Getting it out there — On getting your creative work out into the world.

Bonus short version: Getting your creative work out there, 8 points in 5 minutes — Cut down version edited from Lecture 7.

Video extra: Matt Gooderson — I asked my friend, music producer and innovator Matt Gooderson, for his thoughts on ‘Getting it out there’. And he made us this video!

Lecture 8: More on Getting it out there, and Creativity ‘Theories’ — Featuring some diagrams!

Lecture 9: Crowdfunding and other ways to support creative work — On money, basically.

What a lot of video!

I wonder if next year I should get them properly filmed so they might actually be watchable. But a long lecture is not the best kind of video is it. It’d obviously be better if they were better-lit and everything though. Yes.