Home
Creativity
Seeking an art-school ethos for my classroom 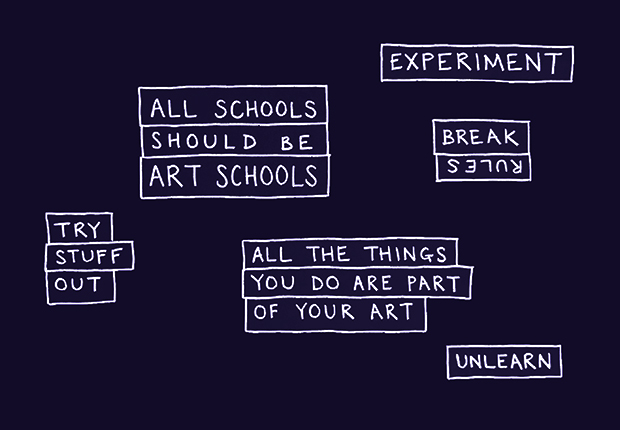 From reading books about the musicians who came up through UK art schools in the 1960s, I have learned about a compelling art-school ethos for teaching — or rather, leading learners. These books include Re-make/Re-model by Michael Bracewell, and On a Faraway Beach by David Sheppard, as well as other things I’ve read about Brian Eno and his art-school experiences.

These are, therefore, curiously, stories about how people became experimental music artists, and pop stars, by going to schools which did not educate them about music-making at all, in any direct way, or about the creation of pop celebrity or a commercial music career, but which gave them tools for thinking, and ways of being, which enabled those students to do the most inventive and magic things.

Here’s a few things I noted down as inspiration while reading Re-make/Re-model:

→ “For his students, one of the ultimate consequences of Hamilton’s teaching and ideas was a sense of grand liberation — and authorization to explore the broadest possible concept of what being an artist might be.”

→ Former student Nick de Ville recalls “The idea of someone making [an object], then a painting, then a photograph — it just seemed to be an entirely new way of being an artist, which didn’t rely on that notion of visual consistency, but seemed to depend on something else — some kind of intellectual continuity, rather than purely visual one.”

→ Art as a way of thinking, not as a set of techniques.

→ “A significant aspect of this energized sensibility derived from the sense of ‘burning the box of beautiful things’ — of rejecting the ideas of the ‘old school’ in favour of pop, Duchamp and the American avant-garde”.

→ The idea of treating your life and your creativity as “a total production”.

→ Richard Hamilton wrote, in 1964, about Marcel Duchamp, “He simply changed the terms by which painting had lived for centuries. In changing the rules, in reinventing art as if it had never existed, he re-opened the possibility of working. The new rules were these: Art is conceptual — that is to say it has nothing to do with visual stimuli external to the artist’s mind. It was to be as absolutely conceptual as much of the art of the past had been retinal.”

→ Hamilton believed that “there are no limits” to the capacity of art.

→ He believed a key part of an art education was “wiping the slate clean” and encouraging artists to work (as Bracewell puts it) “without interference from external influences, artistically unfettered”.

→ Among students in the mid to late 1960s, “a penchant of ‘happenings’, protest, raised political awareness, and the furthest frontiers of the musical and performative avant-grade; for activities which were aggressively radical in their sense of modernity, but steeped in a kind of stylistic game-playing that was simultaneously flippant and profound.”

→ Roy Ascott: “At Ealing, I established the course that subsequently ran at Ipswich. It was a two-year course, so I took the view that the first year was about changing preconceptions, but in very important ways: firstly, by dismantling the idea that you are either a good or bad artist, and that whatever you are is fixed – who you are, and so forth. There was a curriculum of sorts: The first year the course was structured around delight, surprise, shock, introspection, profound subjectivity, outrageous objectivity – anything that would get the kids out of a suburban, O level, schoolwork way of thinking.”

→ Brian Eno explains: “Roy had three specific ideas: one was that art was the politically, socially and psychologically transformative activity of society; and second was that it had to be allied to an awareness of science: it was no use just saying that it all just ‘came out of your imagination’. He wanted to set up a situation in which people were articulate about what they did, and where they were expected to be questioned about it: a critical kind of place, in fact, unlike what was going on in most art schools at the time, one might add. In 1964, art schools were just dissolving out of the rigid, pre-1960s idea of people drawing from life, but they were not resolving into anything–it was more a kind of ‘Do what you like’”.

→ And Eno recalls that at Ipswich, on Ascott’s Groundcourse, “I shouldn’t glamorize Ipswich too much —a lot of it was a big mess and people didn’t know what they were doing; but I had at least got used to the idea that you were expected to be articulate, and people would call you on it. You couldn’t get away with just ‘art speak’”.

→ Anne Bean recalls being “affected very deeply” by the idea that “‘who one is’ is not a stable place” — you could do something one day and do something very different the next day.

All of these things were in the back of my mind when creating my course ‘Your Creative Self’ (which ran January-April 2019) and I’m thinking about them even more as I develop ‘The Creative Process’ (which will run September-December 2019).

(Incidentally, titles are important, and I like all three words of ‘Your Creative Self’, which was my invention, whereas with ‘The Creative Process’, a title I inherited … well clearly even the ‘The’ is wrong … I suppose ‘Creative Processes’ would be ok).

With ‘Your Creative Self’, there were 50 students, and we occupied the same room for three hours and could do lots of different activities. Fifty is a lot but ok when the activities are done in small groups, with some sharing of experiences across everybody afterwards. ‘The Creative Process’, on the other hand, is a core course with 170 students, with one two-hour lecture situation run by me — and I’ll include activities too, even though it’s a lecture theatre — plus the students are also divided into one of six smaller one-hour seminar groups which are led by grad students.

One thing we will obviously avoid is the dominant idea that a seminar session should fill the time with a ‘discussion’ of the lecture or some other prompting material. Even when such a class has had what the tutor regards as ‘a great discussion’, it probably involved, if you look at it more closely, perhaps one-third of the students saying something once or twice. The tutor is understandably pleased and relieved that the time passed quickly with some interesting views being presented, but over the years I have come to realize that this is, at best … insufficient.

What we really need — and this is what worked very well in ‘Your Creative Self’ — is a reflective solo or group activity, typically involving making some kind of representation of something (such as your creative identity, or a process, or environment, or network) and then talking about it. And usually some adding, revising, or transforming.

This is all because, to borrow three key distinctions from the anthropologist Tim Ingold:

— it’s about learning with creativity, rather than learning about creativity;

— this is because we intend to move forward through building meanings and understandings, rather than looking back over accounts of how things are;

— and this is because our aims are primarily transformational, rather than being essentially documentary.*

Similarly, the seminar can’t be filled up with student presentations, because then the experience for most people in the room is another lecture, and we’ve already had one of those.

So, those are some thoughts and ingredients going into the process of designing ‘The Creative Process’. It’s reasonably likely I’ll do a blog post about how it went, in about six months from now. Let’s, er, hope it’s good news.

* Footnote to the Tim Ingold bit:
I previously used this very good bit from Tim Ingold (page 3 of his 2013 book Making), reworded to be be about ‘media’, in my 2015 book Making Media Studies, and here I have reworded it again to be about ‘creativity’.

Illustration at the top is by me, but perhaps worth acknowledging that ‘All schools should be art schools’ is a saying by Bob & Roberta Smith.