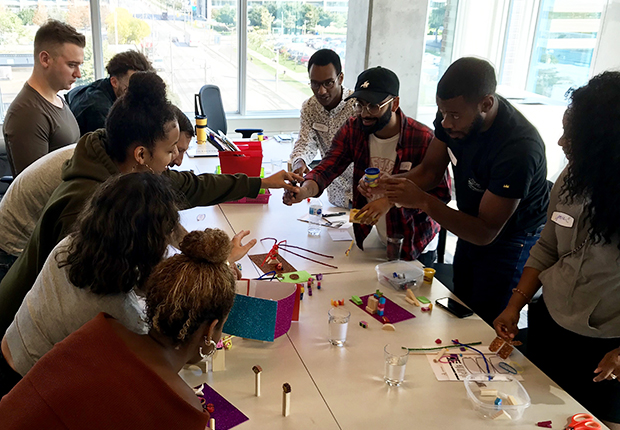 This October (2018) I’m working with the brilliant team at Artscape Daniels Launchpad, Toronto, to design a great ‘program’ to support creative people who want to use digital media and helpful networks to boost their work. (In Canada, as I may have noted before, anything that takes place across time is called a ‘program’, which is not bad because otherwise I’d be using terms like ‘thing’ or ‘bunch of stuff’).

Regular viewers will know that I worked with the LEGO Group on developments of their Lego Serious Play workshop method. The magic there was that everything was represented in metaphors (see, if you like, my whole book Creative Explorations). Then, in other workshops in the past few years, such as the ones for the Digital DIY project, I’ve used a broader spread of creative materials, but kept the metaphor-making idea, which works really well.

The process itself is marvellously simple – we’ve boiled it down to the essentials.

In the first phase, participants each make something that represents what they do, and how they get it seen (by other people). They make it, then explain to everyone else.

In the second phase, they show what they would need to take it to the next level (whatever that would mean, for them). Again, it’s making then explaining.

In the third phase, we put it all together into a shared landscape representing the themes, ideas, aspirations and needs of the group.

That’s basically it. It’s quite simple (which is a deliberate positive point). Of course, what everyone says gets captured and documented. We found that by the end of the third phase, we had arrived at a clear set of things. Even when people start a bit more slow or unsure in phase one, by phase three everyone is leading in and negotiating what goes where to tell a meaningful shared story.

One Response to “Elegant workshop process at Artscape Launchpad”