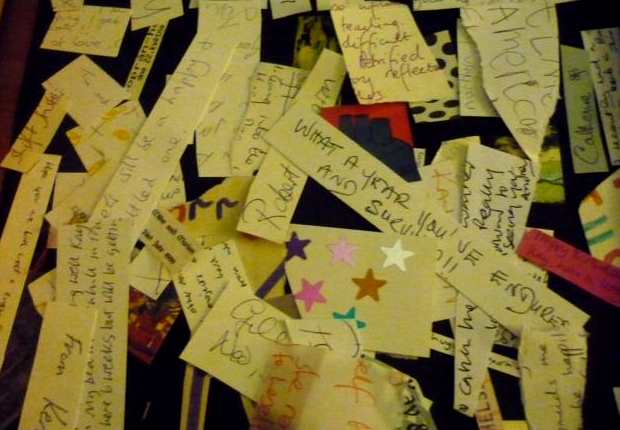 This item is contributed by Kay Steven, from the UK. She explains:

I thought I would explore how I go about making something. I got out a crochet hook and some yarn. The yarn itself was already chained in preparation for a project, I had a piece of gold coloured packaging – I can’t remember what it was from – it had a shape to it that I liked – very fine. My thinking was to explore space and dimensions and to fill it in with coloured yarn. I though this would be a good way to show how I work in freeform crochet. I work with yarn across different spaces and in different directions. As the piece takes shape – I pull it – move it in my hands – look at it from different perspectives. 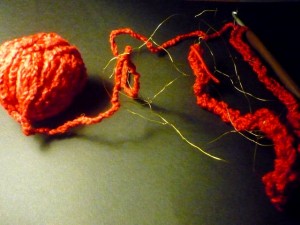 When I make something I don’t have a particular end product in mind. I am more interested in what happens with the material in the time I work with it. I find that when I work I often experience emotions/ideas/ feelings coming unstuck – not every time – but through the creating process there is a sense of movement, a physical translation of unspoken, unclear thought into a piece of work.

That was the plan. I did a little and left it lying on my work in progress/ ideas table. I walk past the table on a regular basis – sometimes I add to the piece or lay out pictures or objects that might trigger an idea for a piece of work then or later.

At the time I started this [Making Things With Makers About Making] project I was curating a show called ‘Outing Ageing’ – so I was pretty busy. I kept looking at the piece on the table. I would pick it up – move it around but it wasn’t going anywhere. The show finished and I felt a bit lost. I wanted to make something –but interestingly not with yarn. I looked around my studio space and opened a box containing old cards. 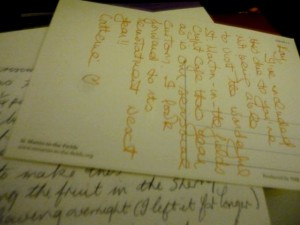 I’d had this idea some time back to do something with the handwriting from cards that had been sent to me. One of the pieces in the show had made by an artist who had re-taught herself to write. That is, she got books out the library about how to write and followed the instructions and wrote a memo to her future self in a child-like style. I think the mix of those thoughts with wanting to make something in response to the end of the show on ‘Outing Ageing’ influenced what I made. 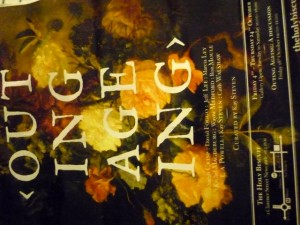 I took a poster from the show, looked through handwritten cards in my collection and started to cut and select. I turned the poster over and used the blank side. 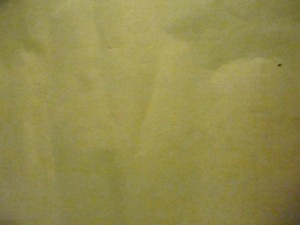 I stuck on different pieces of handwritten card. 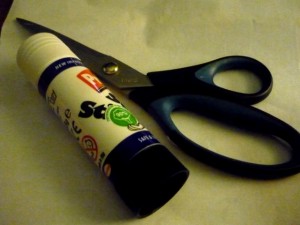 As I selected I thought about the people who had written to me. I thought about what was going on for me (and them) at that time. Some of them knew each other. In selecting the pieces I wanted to have the writing rather than the content. I wasn’t trying to make sense of what was on the page. I wanted to curate some fragmented moments. 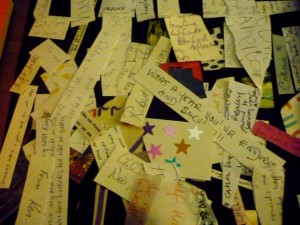 The process reflects a lot of the way that I work. I pick things up, I lay things out, I move things around, I collect little and large pieces of material. I work with the material. I shape the material and I make sense (or not) of what is going as I go along.

The final photo is of what I have done and some of what was excluded. 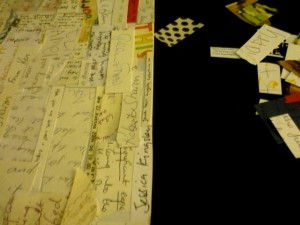 I will probably varnish the piece and cut it into small cards – so I will end up cutting the ‘Outing Ageing’ poster and I will have used it to contain fragmented letters from my ageing life.

Thank you to Kay for sending this in. Next you might like to look at other items in the series.