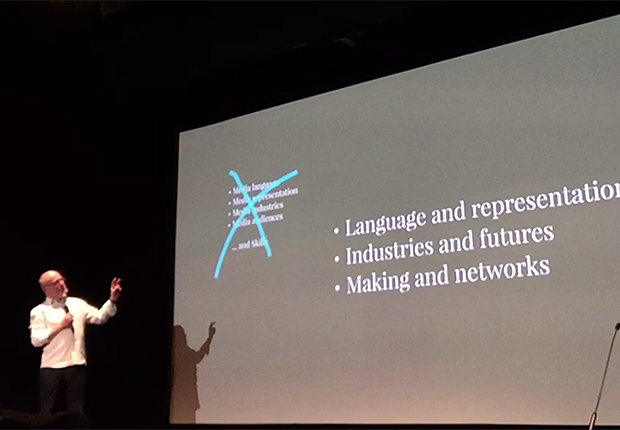 Last week I spoke at the BFI Media Conference, the annual conference for Media Studies teachers in the UK. This blog post is intended primarily as a resource for teachers, who are now required to teach their students what Gauntlett said about ‘Theories of identity’ as part of their teaching about ‘Representation’, for the Media Studies A and AS Level. As discussed in an earlier post (‘BFI Media Conference and me on the National Curriculum‘), this is potentially confusing because the Department for Education specification doesn’t say quite what they are referring to.

Possibly, or probably, whoever wrote the specification was thinking of my book Media, Gender and Identity (2002, second edition 2008), which is certainly relevant in this context, and which I am told is liked by some Media Studies teachers. That book also includes helpful explanations of other theorists on the list, such as Judith Butler. But it’s also rather an old book now, and therefore isn’t talking about today’s media landscape.

In my talk at the BFI conference, then, I sought to show what Gauntlett things you could talk about which would be both relevant and recent. It turns out this is ok, because although I don’t package what I do at the moment in terms of ‘identity’ and ‘representation’, the work is still about those things, but in different ways. Making is Connecting is all about how people build a stronger sense of self-identity through creative practices – in other words, through creating their own representations – and make meaningful networks and relationships through that creative work.

(Making is Connecting is my most relevant book here. The first edition came out in 2011 and I’m just finishing off the second edition, including quite a lot of new material, which will be out in early 2018).

I made a 70-minute video of the talk, including the Q&A, recorded on an iPad, so the quality isn’t amazing, but it’s adequate. Here it is:

I’ll include here, as text, a couple of things that appear in the video. First of all there is the bit from Making Media Studies (2015) where I suggest a different way of thinking about media today:

“We should look at media not as channels for communicating messages, and not as things.

We should look at media as triggers for experiences and for making things happen.

They can be places of conversation, exchange, and transformation.

Media in the world means a fantastically messy set of networks filled with millions of sparks – some igniting new meanings, ideas, and passions, and some just fading away”.

And perhaps more importantly, in the final bit of the presentation I offer this summary of things that I talk about nowadays which it would be relevant to talk about as ‘Theories of identity [associated with representation]’ from Gauntlett.

‘Theories of identity [associated with representation]’ from me would be the ideas around:

→ People having a route to self-expression, and therefore a stronger sense of self and participation in the world, through making & exchanging online

→ “Media [made by all of us] … can be places of conversation, exchange, and transformation”

→ “a fantastically messy set of networks filled with millions of sparks – some igniting new meanings, ideas, and passions, and some just fading away”.

→ The need for better “platforms for creativity”

So it’s still the idea of people building their own sense of self-identity, but through everyday creative practice.

I say it’s ‘still the idea of…’ because I mean that in Media, Gender and Identity, a decade or more ago, I was talking about people building their own sense of self-identity in the ways they selected and used different kinds of media in their lives; and then, what we are talking about now is still the idea of people building their own sense of self-identity, but through everyday creative practice.

I hope this makes sense! Comments and questions welcome.