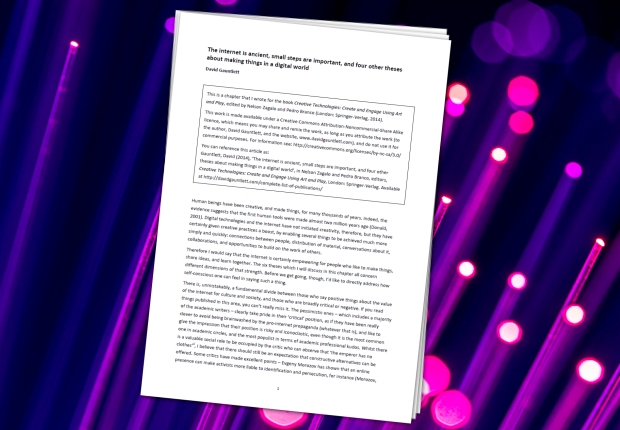 I recently finished writing an article entitled: ‘The internet is ancient, small steps are important, and four other theses about making things in a digital world’. This will be a chapter in the book Creative Technologies: Create and Engage Using Art and Play, edited by Nelson Zagalo and Pedro Branco (London: Springer-Verlag, 2014).

Here you can download a PDF of the article.

The article starts off by asserting that  the internet is empowering for people who like to make things, share ideas, and learn together. But it immediately notes how self-conscious one can feel in saying such a thing:

There is, unmistakably, a fundamental divide between those who say positive things about the value of the internet for culture and society, and those who are broadly critical or negative. If you read things published in this area, you can’t really miss it. The pessimistic ones – which includes a majority of the academic writers – clearly take pride in their ‘critical’ position, as if they have been really clever to avoid being brainwashed by the pro-internet propaganda (whatever that is), and like to give the impression that their position is risky and iconoclastic, even though it is the most common one in academic circles, and the most populist in terms of academic professional kudos.

The article discusses this situation for a little bit. But then it says:

In spite of all this discord, I think that it is possible to make some strong positive statements about qualities of the internet which it is difficult to disagree with. I present six of them here. Several of them are pragmatic ‘X is better than Y’ statements which I would hope are pretty irrefutable. Let’s see.

The statements which the article goes on to discuss are as follows:

1. The internet is ancient (in other words: the internet has affordances which connect with ancient, great aspects of humanity).

2. A world with lots of interesting, creative things is always better than a world which offers a small number of popular, smartly-finished things (which is quickly revealed to have an even longer formulation: ‘An ocean of interesting, creative things, regardless of their professionalism or audience size, is always better than a small box of popular, smartly-finished things’).

4. The distribution and funding possibilities of the internet are better than the traditional models.

5. Small steps into a changed world are better than no steps.

6. The digital internet is good, but hands-on physical things are good too.

Hopefully you might think this all sounds interesting: if so, take a look at the full article.

The article is made available here under a Creative Commons Attribution-Noncommercial-Share Alike licence (which means you may share and remix the work, as long as you attribute the work to the author, David Gauntlett, and the website, www.davidgauntlett.com, and do not use it for commercial purposes).

The image at the top of this post incorporates a photo of fibre optic cables by Flickr user Ben Felten (see original), used under a Creative Commons BY-NC-SA 2.0 licence.