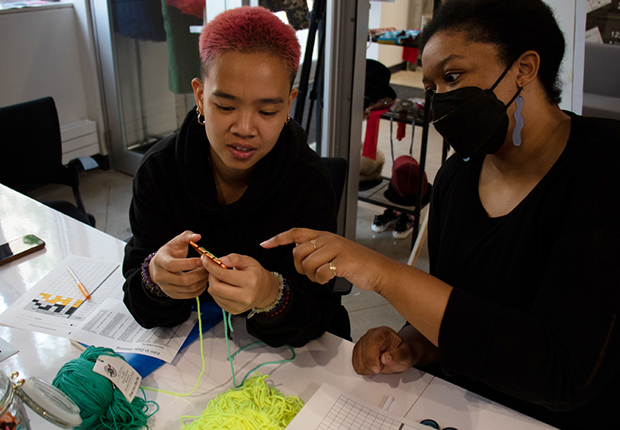 In July 2022, we – The Creative School’s Innovation Studio – ran the Summer Studio, a creative camp for adult makers, artists and creators.

[The following is an edited version of a write-up by Asmaa Toor, whose work is gratefully acknowledged].

With the aim of exploring creativity, community building and innovative design practices, participants spent over three weeks in a choose-your-own-adventure style programming led by the artists, creators and professionals from The Creative School Innovation Studio, The Design Fabrication Zone, The Transmedia Zone and The Fashion Zone.

The Summer Studio featured over 100 hours of programming, with more than 40 campers, 50 staff workshops and 20 camper + member workshops. The participants came from many different disciplines and included a mix of students, alumni, and contract lecturers, as well as poets, designers, DJs, artists, architects, engineers and podcasters.

Camp Summer Studio was built on the idea of the concept of an unconference, which the team describes as a participant-driven environment designed to avoid hierarchical aspects of traditional conference structures.

“As soon as Ashley suggested the camp, we knew it would be a wonderful way to build connections, both on campus and across the wider community,” recalls David Gauntlett, Canada Research Chair and Director of the Studio.

Supported by the Fashion Zone, Transmedia Zone, and Studio members, the Summer Studio encouraged participants to bring their own creative passions, and learn from others.

“The Studio as a whole is all about building community and finding ways for innovation to grow from the places where our creative practices overlap with one another, and so when we were designing the experience that would become camp, we knew exactly where to start,” explained Kjaer. “The unconference structure provided for a perfect blend of community, skill building and creative chaos, fueled by the energy of our staff and members but really ignited by the campers who joined us for three weeks of programming!”

One of the most difficult things about being a creative in the industry, Lewis says, is finding low stakes, high value places to test your ideas.

“At Summer Studio we gave attendees both an eager audience and an opportunity to participate in emerging projects, workshops, discussions and ideas. Just two months later and so many of these experiences have *already* evolved to take the form of installations, course proposals, workshops and topics for talks! That was the hope so it’s thrilling to see the impact really making a splash in the industry,” Lewis said.