Home
Creativity
Making meaningful connections … and the future of universities 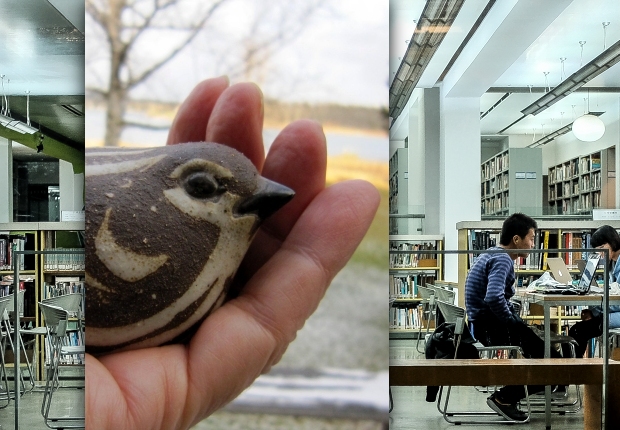 When I think about the future of things these days – such as, say, ‘the future of media’, which I’m speaking about in Kyoto next month, or the future of universities, which I now have to think about more as part of my day job – I tend to end up back with this bird:

Or, you know, not actually this bird, but with the set of thoughts that I wrote about in this blog post about ‘making meaningful connections’ which was illustrated with that bird.

There we saw my boiled-down list of what’s important:

And we noted this very good quote from Kevin Kelly:

“The internet is this huge copying machine – that’s what it does. How do you create things of value, if anything can be copied indiscriminately? I think the answer is that the things that become valuable are the things that cannot be copied.”

Put these together and we find that in, say, the future of media, or the future of higher education, the value is bound to be in the capacity of these things to foster meaningful connection-making.

That’s something which you can’t get from standard broadcast-mode media, such as television-watching or music-listening, and it’s something that you don’t get in broadcast-mode education, such as the traditional lecture, or even the stilted half-hearted discussion you might get in a university seminar.

But if we’re talking about things that people are going to be willing to pay for – yes, that measure of value – then the bar is raised by what we can get instantly and free on our phones and computers. We want something more, something richer. So in music, people now seek a sense of community and engagement with the artist, and the thrill of a live experience, and perhaps tactile objects, which is one of the reasons why vinyl is cool again.

And in education, people will rightly want a powerful, personal, meaningful ‘live’ experience which is unlike anything you could download. In the UK, students are now charged £9,000 fees per year (so £27,000 for 3 years) – paid for gradually after you’ve finished – and of course you have all your living costs on top of that. Students typically leave with over £44,000 of debt.

We are in a world where you can get numerous amazing TED talks online, and can access endless information and ideas about everything, and even some form of discussion with like-minded people, undermining rather a lot of what universities used to offer.

You can also pay, say, a few hundred pounds (at most) for bespoke online courses with a lot of individual attention, via a screen; and if you live near somewhere vibrant like London then there are numerous fantastic events every day for modest amounts of money. Even if you went to quite a lot of premium-price events at places like the School of Life or Tate, you’d still be paying a fraction of the cost of being at university.

And ‘better’ here doesn’t mean a greater amount of lectures, instruction or stilted discussion, because as we’ve already established, we can already get endless amounts of that for free. And all the time. And on our phones.

So it’s back to what the handcrafted bird tells us: everything in higher education should be like the most vivid art school experience, with continual conversation, critique and exchange of ideas; the inspiration you can get by engaging with the creativity of leading figures and your exciting peers; and making things happen, so that every day of learning is new and hands-on, an experience of reinvention and transformation unlike anything you could get by just sitting at a screen, or indeed sitting in a lecture or an uninvolving class. It’s making meaningful connections, where there’s really something to grasp hold of and engage with – physically, emotionally, and both.