Home
Creativity
Do things and see what happens: music-making, creativity and collaboration 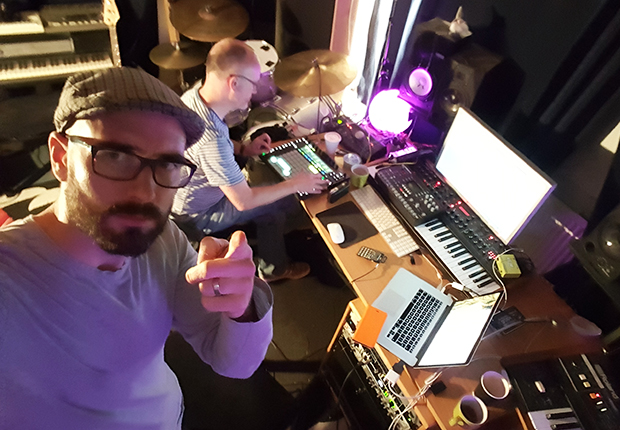 I spent a great day last week working with Matt Gooderson in his shared studio in The Biscuit Factory, Bermondsey.

Matt is the music producer, formerly of Infadels, and my colleague at Westminster School of Media, Arts and Design, University of Westminster.

We have an ongoing conversation and collaboration about new approaches to creativity and how to stimulate it (one example of which was this video of an actual on-stage conversation back in March).

On this studio day we had no particular plan of what to do – which was fine and good in that we are sure of always finding something.

This blog post is illustrated with a few tweets. Here is the first: I had come equipped. 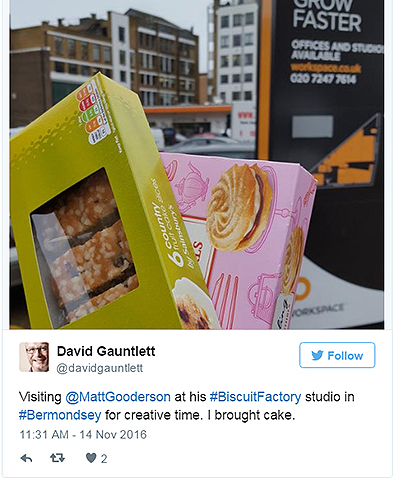 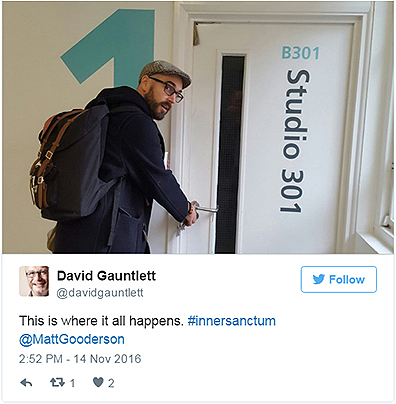 Some kind of music collaboration had been lightly mooted, but I was a bit unsure about that because, at root, I didn’t want to be embarrassed trying to do my very amateur/beginner music tinkering in front of someone who actually knows what they are doing.

Matt is very happy with his new collaborative way of working where he is making an album but mostly not playing any instruments.

He reassured me to just do it and not be worrying about it. I steeled myself and pushed ahead.

I had brought my Korg Kaossilator and my Teenage Engineering Pocket Operator Arcade, two small music-making toys, whilst the studio was full of all kinds of lovely equipment.

As we got into it, my anxious feeling fell away. Matt has a nice bosh-bosh, tinkering, do things, see what happens kind of approach which I like, so then we were just two people tinkering together.

And I started to feel my first realisation of the day, as captured here: 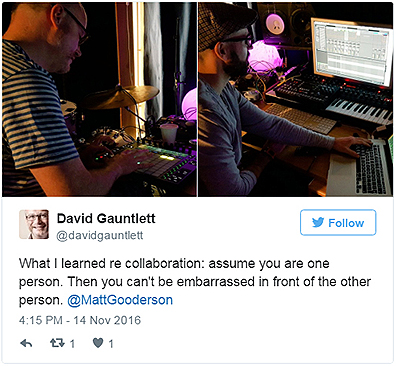 If you think of yourself and the other person as one unit, one mind, then collaboration is fine and easy, and there’s no scope for being embarrassed or humiliated because … well you can’t really be embarrassed in front of *yourself*, can you. Not for just doing your best and trying things out, anyway.

The second thing was about how to make things happen. Matt’s way of working, as mentioned above, is not to spend too much time preparing or planning, but just to start, do things, try things out, and make it work. “If you arrive at the studio with some thing you’ve been working on, it ends up just feeling a bit flat. You can have some ideas, but do it here, live and fast, make it exciting.”

And that seems to work. Or at least, we made two tracks in four hours.

We did one idea and took it to a certain point, where we each did one recorded arrangement, and then – crucially – we stopped that. Of course, in music-making, you can develop something endlessly, adding parts and effects, putting in a surprising middle section, doing different mixes, and so on.

But we got it to a certain point and then stopped that, and did something different, a second idea. And again we got it to a point where we both outputted a different arrangement each. Spending more time on it would have made it much better, for sure, and out of the 3-minute version of this track that I mixed, I only really really love a couple of bits lasting 10-15 seconds each, and I’d love to have another go and spend lots more time making it especially good.

But in our two hours per track – which includes experimentation and gearing up and just chatting – we did much better and got much further than I would have expected.

So that’s the other key message: 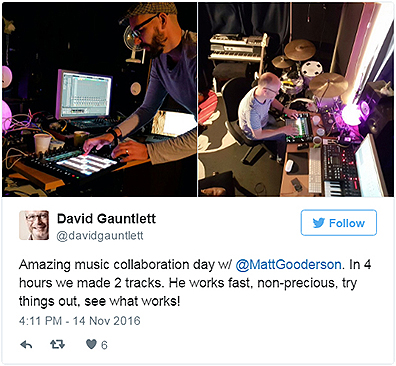 I’m sure this can be transposed into different creative fields. Indeed, it’s what we are always hearing from all areas of design, from software to products to service design – iterate quickly, prototype cheerfully, fail faster to learn most speedily.

When we have the courage to press forwards and see what will happen, rather than being stuck in the anxiety that it might not be good, everything’s immediately a lot better. First, you get to make something. Second, you feel good about trying. Third, you get the benefits of learning by doing.

Even if the first output is not amazing, you’ve still made a much better use of your time, and you’ve still got time – and some new ideas – to make a better next one.