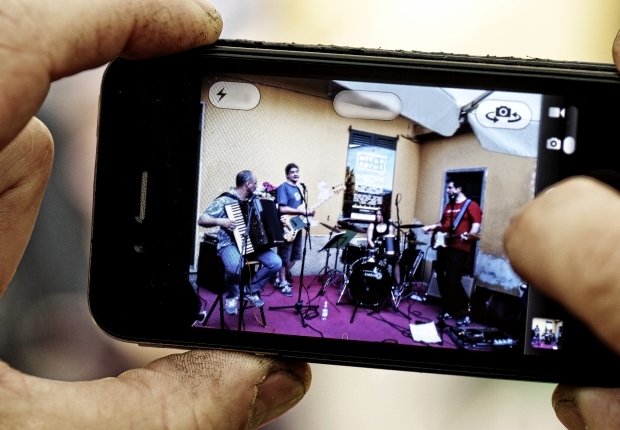 I am delighted to be able to unveil a new research project, Digital Folk, which is a collaboration between me and Simon Keegan-Phipps, of the University of Sheffield. It has been funded by the Arts and Humanities Research Council (AHRC), and runs for two years from December 2014.

It is really the brainchild of Simon, an ethnomusicologist with a background in research on English folk music and dance. He is the project’s Principal Investigator, and is consequently responsible for sensibly doing all the things we promised to the AHRC.

Simon asked me to be the Co-Investigator on it, so we could tie my interest in creativity and online networks with his interests in music and folk culture. Also, it is part of the plan that as an ‘experienced’ (very, very old) researcher on funded projects, and knowing something about communicating about and around research in general, I can proffer my wisdom, such as it is, to Simon, who is 10 years younger than me and thusly an ‘early career researcher’.

In reality, of course, I expect we will learn just as much from each other.

I am very happy to be Co-Investigator rather than Principal Investigator, as it means I can pretend that I am actually good at collaborating, despite being an annoying perfectionist, and because I am not really responsible for sensibly doing all the things we promised to the AHRC, so I can be a bit more playful, and connect things up with big questions.

The project will explore the ways in which folk arts participants make use of digital resources, tools and networks in order to learn, collaborate, reinterpret traditional material and create new work.

Simon is obliged to consider the detail of how digital technologies are transforming the everyday practices of traditional folk musicians and dancers in England, including the curious but stimulating marriage of the modern with the traditional. A full-time Researcher will also be employed to drive the research project over the two years.

Meanwhile I will support and engage with those studies, but am likely to be thinking about issues such as:

→ The relationship between hands-on creative practice in everyday life, and digital networks and communities

→ The changing meanings of ‘folk’ – given my own preference for everyday, handmade, DIY creativity supported by online conversations and inspirations – is that the essence of ‘digital folk’?

→ Folk artists as a kind of English maker movement – perhaps!

We will, of course, be doing events and videos and interesting things, information about which will appear here and on the Twitter and places like that. And we welcome comments, links and suggestions – in the comments bit below, or contact us direct. Thank you!