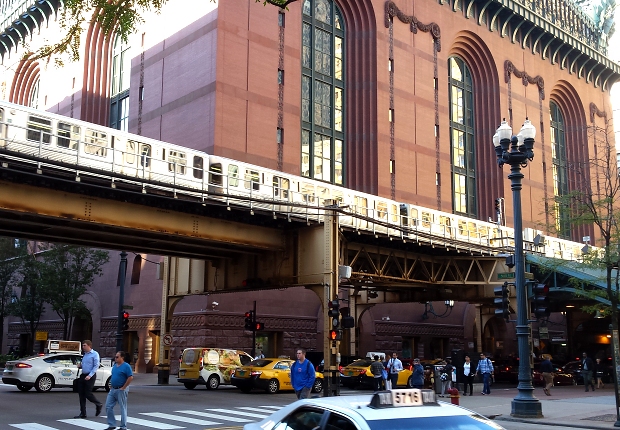 This blog post follows on from yesterday’s piece. I’m in Chicago, seeing how their Public Library System is rethinking the role of the library.

Today we took a trip to the West Town branch, one of the 80 branch libraries in Chicago, which was currently playing host to the Mini Maker Lab. As the name suggests, this is a movable, smaller, pop-up version of the Maker Lab which is now a permanent feature at the central Harold Washington Library Centre. 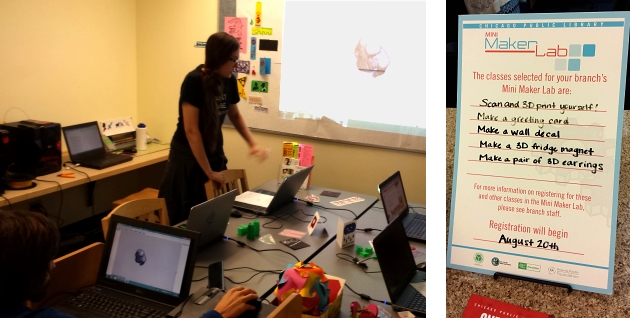 Like the central Maker Lab, but more mini, the Mini Maker Lab offers people in local communities the opportunity to try out new fabrication technologies such as 3D printing and computer-controlled laser-cutting, in simple classes where you can design and take away things such as a keyring, earrings, or lasercut stickers, or you can have a 3D scan of your own head printed out as a little bust of yourself. The sessions are presented as accessible and introductory, so that curious people can just drop in and try things out.

The branch itself had a number of activities going on, and had recently put on two punk rock concerts – on Saturday afternoons – catering in particular to teenagers too young to go to night-time gigs, and to parents of small children unable to go out like that now. There had been precisely two complaints, but one of them included the observation that the complainant had “never seen so many people at the library”, which rather cancelled out the point.

Libraries like this one are in no way turning their back on their core functions as largely peaceful spaces where people can read, and borrow books, films and music. But they are also doing extra things to get new people into the library, and, I guess, partly to disrupt the image of libraries as rather old-fashioned places where some grumpy older people tell you to shhh.

Later in the day was my talk and workshop, ‘Platforms for Creativity’, which had been helpfully promoted all over the library (and, of course, online) over the previous weeks.

I had a delightful selection of materials, some of which had been brought with me and some had been acquired in Chicago: 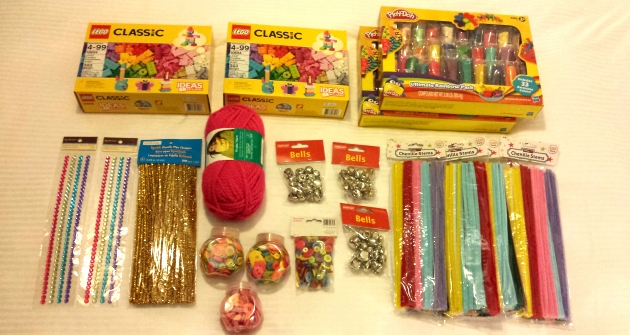 A good number of people came along. I talked about ‘platforms for creativity’ (which you can read an introduction to here), and we explored it through some creative activities.

Here is the scene:

And here are some tweets:

As seen on Instagram, this is @loosetooth's rendering of a bit of what I was saying at my Chicago workshop today. pic.twitter.com/tJwZ3piQSe

Anticipating the unknown and feeling better after a disappointing mocha… @davidgauntlett at the… https://t.co/mKUc1wjTpw

People doing so many creative things at my @chipublib #platforms4creativity workshop – ace, & I met many great people pic.twitter.com/Ar3v8CqlOI

@davidgauntlett was a hit in Chicago! Thank you for spending so much time with our @chipublib team and sharing your insight with our city!

I had a really interesting and enjoyable time in Chicago. Many thanks to Brian Bannon, Mark Andersen, Kate Lapinski, and their colleagues, for inviting me and being such nice hosts. I learnt a lot, and look forward to connecting the Chicago cases and examples with other ones, as I continue to explore creative-platform-building.