Home
Tools for thinking
Micro LEGO Serious Play: How small can a useful tool for thinking be? 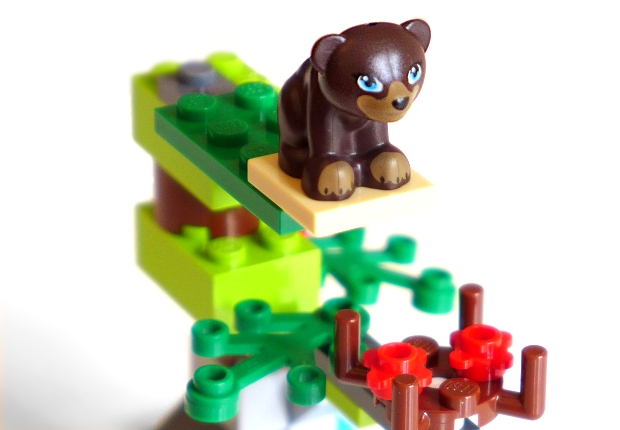 LEGO Serious Play is a way of using LEGO bricks to express feelings and ideas. It is used by adults (mostly), to collaborate and discuss relationships and concepts. The building is done in metaphors – which might sound odd at first, but our research shows that almost anyone can pick it up. The process offers a unique and powerful way for people to exchange ideas.

I have a long-standing interest in the idea that, if you give people the opportunity to be creative and make things, they can often communicate more fully and more thoughtfully than they might do just through talking. For this reason I worked with the LEGO Group on LEGO Serious Play from 2005, and ended up co-writing the ‘open source’ release of LEGO Serious Play, launched in 2010. I’ve used it for a few things over the years. My book Creative Explorations (2007) explains its use as a social-science research method. I’m interested in it as a ‘tool for thinking’ (see, for instance, this blog post). And recently I developed a workshop for PhD students which supports participants to both share feelings and develop ideas about the PhD process.

One of the key clever things about LEGO Serious Play is that through externalising feelings and knowledge – by building them in LEGO – then everyone in a group gets a voice, because everybody builds and everybody talks about what they have built; and then also you get the opportunity – because you can literally see it, touch it and change it – to review everyone’s perceptions, and collaborate to make them fit together in a coherent and meaningful way.

To take a couple of these boxes anywhere you need strong arms, and a car. The official process also has rather complex manuals, and scripts, and training. Don’t get me wrong – these are basically excellent products, produced with great care and intelligence. But you would never call them small, lightweight, portable, easy, or quick.

For several years – on and off – I’ve been fascinated by the question of how small you can make a meaningful LEGO Serious Play experience. I want LEGO Serious Play in my pocket, basically. Easy to carry, simple to do, but still powerful.

For quite a long time I’ve known that you can do a pretty good LEGO Serious Play experience using just the LEGO Serious Play ‘Window Exploration Bag’, which you have to buy in boxes of 100 bags (LEGO set 2000409, currently £315). Those bags were intended just for very basic introductory exercises, but actually you can do a lot with them. Each bag contains 49 pieces, and is good value for £3.15 each, except that you have to buy 100 of them.

Now. In this blog post I’m looking at whether you can do LEGO Serious Play using one of the cheapest possible retail sets that you can get from any toy shop. Specifically, today we will be using set 41046, Brown Bear’s River, which is one of the LEGO Friends animals sets and sells for £2.99.

It is, I think, a really nice set. My two-year old daughter loved it. But can we do LEGO Serious Play with it? Here it is – the packaging and the set itself: 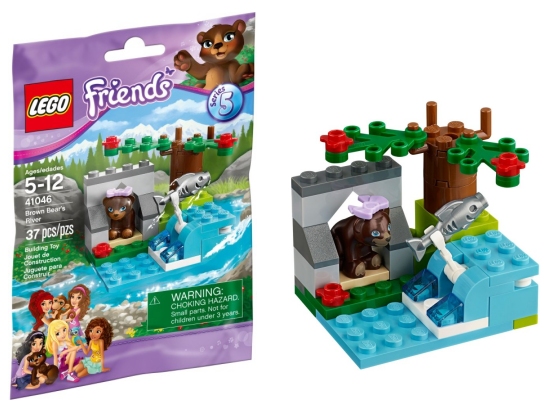 Those are official marketing photos, but the rest of the photos in this post were taken by me on our kitchen table.

So, here are the parts – 37 pieces. The little bear is very nice, and you get a fish too. There are some actual bricks, and two of several pieces, which is good – you often want a second one of something. 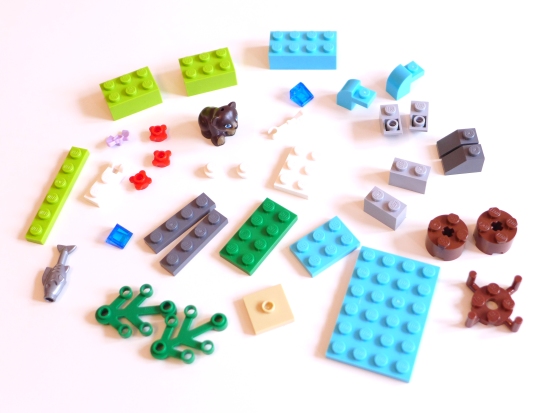 In the following examples I imagined that I was a person – or a series of several people! – trying to communicate something about some issues in my life.

This is the first thing I built. 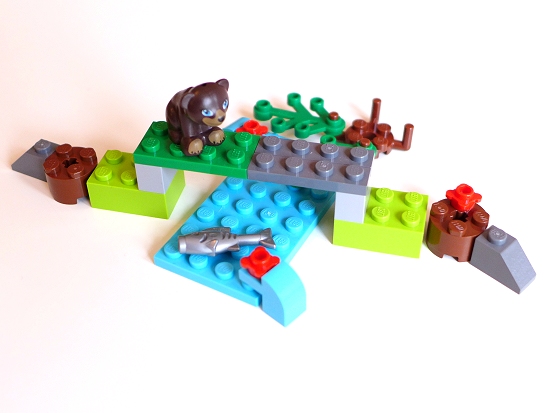 LEGO Serious Play models are meaningless without the stories that go with them, so I’ll have to tell some stories. So, this model was built by Kevin, a 21 year old student coming towards the end of his degree course. Here he is represented by the bear, making his way gingerly along a bridge he doesn’t entirely trust. The flowers and the fish represent things he’s trying to get to – in particular the fish is a desireable job, but it’s in the fast-flowing stream and he doesn’t feel he can get to it. Some people have tossed him some leaves – other bits of work or suggestions for projects – but he doesn’t want them and can’t catch them anyway. So he’s feeling precarious and uncertain. 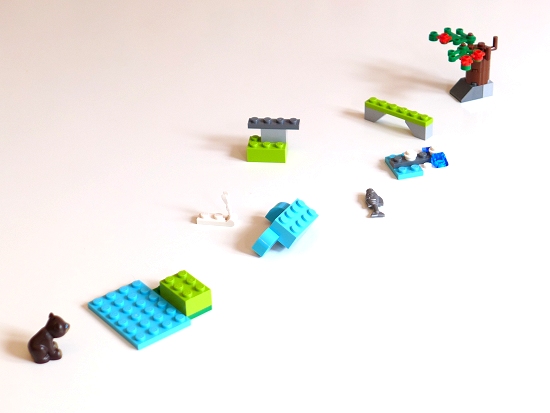 This model is by Amira, a 34-year old computer scientist. Her model represents a kind of yearning journey towards a nurturing relationship, represented by the flowering tree, but this is far away from her – the bear – right now. Various obstacles stand in her way, including, she feels, financial problems (the cash register) and difficult previous relationships (represented by other bits). By shifting around the elements we might try to work out how she might feel able to move towards her goal. 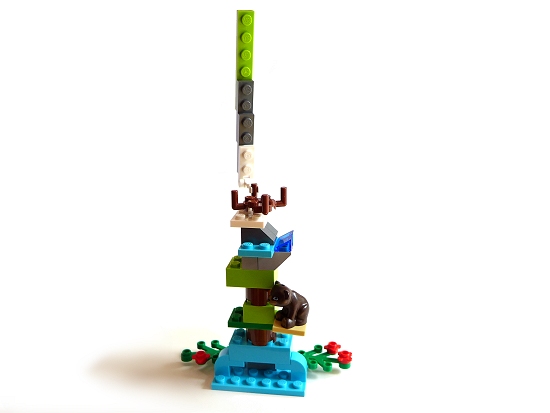 This model was by George, a 67-year old retired man who feels he still has more to do in life. He is pleased with his achievements, represented by the pretty plants and flowers at the base, he still wants to travel more (represented by the sky-blue triangles further up) and wants to write a book, which he has always dreamed of, represented by the high peak at the top of this tower. The levels of the tower represent different steps and challenges on this journey. 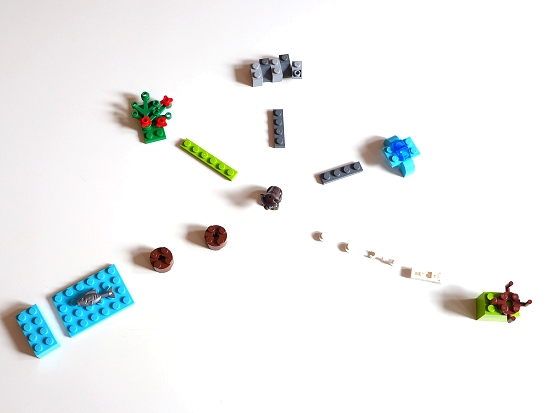 In this more diagrammatic model, 41-year old Miriam has shown herself to be at the centre of, and somewhat torn between, a set of different obligations and aspirations. There is a tension between the countryside and having to live in the city, and between a need to make a living and wanting to do what she really enjoys. The need to attend to an elderly relative is another pull upon her time and energies. 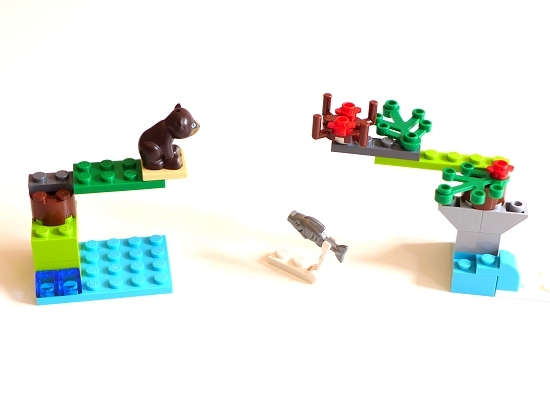 This model by 37-year old Winston reflects a feeling of isolation, a need to jump across a gap from a current disappointing life into a new and hopefully more promising one. The jump is quite hard and he is not wholly decided. The tasty fish in the river may also turn out to be a shark that bites him. 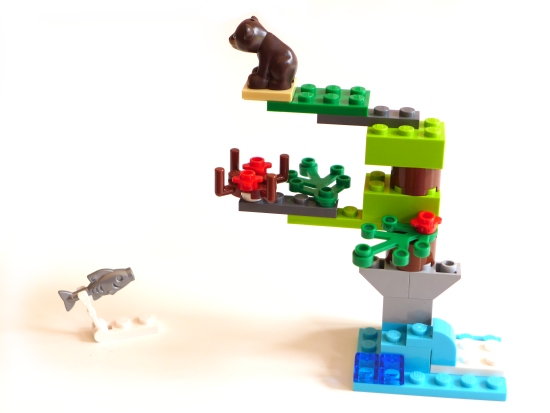 Having considered his options and possibilities, Winston reconfigures the model to include aspects of his current life shifted onto and combined with the life he was hoping for. By externalising the decision he was able to see that it didn’t have to be such a disruptive break with the past – he could actually combine these worlds. The possible-shark fish still circles around, but Winston feels that he has constructed a happier and more stable base now.

OK so that’s the last of the models. Those stories about people were made up by me just to illustrate the kind of thing that people might want to, or be able to, communicate with the 37 pieces of Brown Bear’s River.

This is what I think we can conclude:

→ You can make a range of different things with the 37 pieces. You can show a model of a journey, or a sort of diagram of relationships, or highlight particular challenges or decisions.

→ You can convey personal and serious thoughts, feelings, issues and dilemmas.

→ The models that were built do, inevitably, have similarities – there tends to be a bear (!) and some other stuff, nature, fish and flowers – there’s no getting away from them really – but crucially, the meanings attached to the pieces are different, and so very different things can be communicated.

Overall I think it went quite well, and was an interesting step in my ongoing, long-term, Micro LEGO Serious Play project.

Finally, a note for if you are now attracted to LEGO set 41046, Brown Bear’s River: LEGO sets don’t have a very long shelf-life; instead the company regularly makes new things which replace the older things. So the Brown Bear may only be around until September/October 2014. The good news is, there are always rather a lot of other good LEGO sets just around the corner.

6 Responses to “Micro LEGO Serious Play: How small can a useful tool for thinking be?”